I've discovered Malcolm Gladwell and decided that I like what he has to say a lot:

Tomorrow, Tuesday, December 21, 2010 she will be cremated. I won't be able to attend the cremation, but I wrote the following for the occasion.

I haven't been here in a while and that has been deliberate. I've needed to ween myself from my obsessive Internet and so I needed to be here much less as well. But I wanted to let you all know I am still alive, still designing gardens and in many ways still doing well.

I have lots of pictures I could and perhaps should post here. I know that it is nice to have the chronicle to look back on and if things slow down and I have time to do so, I will share.

But for now I leave you with a pretty picture of a design for a contest that I made together with another designer and Tess. It was one of my first successful collaborations with Tess - a case where I really trusted her skills and talents and didn't try to micromanage. That trust was rewarded, and in turn I learned quite a bit about Photoshop as well. Skills that are good to have.

Gardening season slowing down here and I have promised myself to "enjoy life a bit more" in the coming months. It is gray out and I have been stressed and the results have been that I am in a bit of a rut. I want to start going out to the theater, visiting museums and lectures and the like more. I've been neglecting those things for a bit. I would like to make the time to enjoy those things more again.

Last night we laughed ourselves silly at the local filmhouse watching "The Topp Twins: Untouchable Girls". The movie documents the careers of New Zealand twins Jools and Lynda Topps, two yodeling lesbian comedian activists who really won our hearts with their down-home, down to earth nature and good hearted, good natured good times.

Watch some clips and see for yourselves. They have various character sets whom they play spanning both class and gender.

A friend from my writing group sent the following link:

I put in several texts and got disparate results including: Kurt Vonnegut, Ernest Hemingway and Chuck Palahniuk. Not sure if I agree or what to make of that, but it's fun nonetheless.

Who do you get?

It is warm and the the peaches in the bowl keep rotting quickly; so I need to eat them even quicker. Life is good and I haven't been here much. This was to a large extent a conscious decision. I needed a break. I needed to withdraw and I'm still not sure what my relationship with the Internet and this journal should be. I am looking for focus. I am trying to cut down on the distractions. I don't know if I am able to say that I am succeeding but the attempt is there.

We are spending the summer here at home. We are working on the house. Yesterday I painted the cement floor in the office downstairs a color called "Rhinocerous"; it's kind of a purpley, leathery gray. I like it.

Imbetween I am reading about roses and admitting to myself that they really are quite lovely. There are so many sorts, so many colors, so many options and it seems somehow silly that I once could make sweeping statements like: "I don't like roses; they are too cliche." , when really there is are so many roses and they range from exotic to nonchalant to candy coated.  I believe I will be planting some "Ballerinas" here in the gaden. The thought makes me happy.

Last week I read "The Hours" by Michael Cunningham and this week I am rereading it. I am surprised that I never read it before. In 2002 I saw the movie and also read "Mrs. Dalloway". Funny that I should wait till now to read this book, but that's how things work sometimes, isn't it.

I sit here fussing over roses and thinking about Clarissa, Clarissa Dalloway and Clarissa Vaughan, and flowers, and peaches in a bowl and the color I painted the floor and other trivial, temporal things, and how ife is good.

I've posted very few pictures of the house here. Okay, some of the bedroom, yes, but beyond that, not really. This is mostly because I have been in denial of the house. I wouldn't have picked the neighborhood. I wouldn't have picked the house. None of it was really ideal. The only redeeming feature was, well, that Tess lived there. That's a pretty important feature, though, so I dealt.

However, slowly but surely, the house is becoming a place I really enjoy living in. The garden, which was a year ago literally a field of weeds with a tree in it, is now turning into a garden. We have done lots of work inside, though there is lots more still to be done. And - and!!! - last week we redid the facades. Or rather, we had them redone. Which had been in the planning for months and months and months, but it was so exciting to finally have it done, and the result are so much better than we expected. We knew it would be a big project, but I think even we underestimated the extent of the impact.

The house is so much more light and fresh and open. It's trhilling really. And on a more practical note we will be saving at least 30% on energy costs. So it's all good.

Somehow the 20 minute bike ride from the train station is a little more bearable now.

Back before (okay, kind of during, but you get the idea) 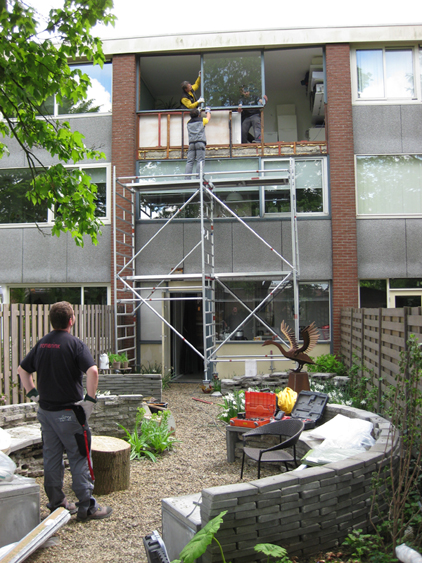 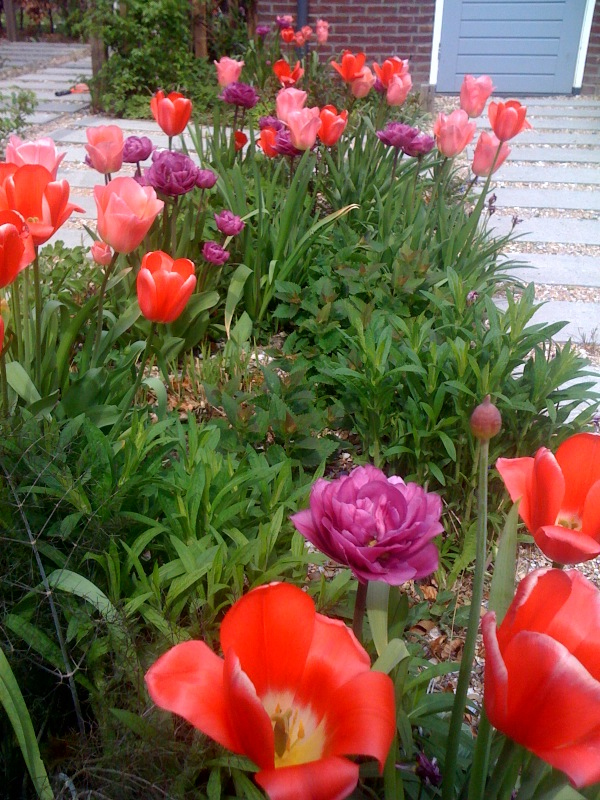